*Article not assigned to an issue yet

Jammu and Kashmir provide a pleasant environment for the lavish growth of diverse macrofungal groups where many members are ethnically appraised. Local people enjoy edible mushrooms due to their health beneficial effects ensuring food security for inhabitants. In this regard, a recent field survey was carried out by our team in Kishtwar High Altitude National Park, India gifting us several traditionally popular edible mushroom species. One of the collected samples was identified as Flammulina velutipes, as described herein, which was further subjected to isolation of various fractions to study myco-chemical composition and bioactivity. Our results showed that the decoction preparation was capable of better radical scavenging followed by hydro-methanol extract; while the infusion exhibited a promising effect on the chelating ability of metal ions. The outcome might be justified by the quantity of phenol which was in the utmost in decoction (14.85 μg gallic acid equivalent/mg of extract) followed by infusion preparation (12.02 μg gallic acid equivalent/mg of extract). On the other hand, lycopene (1.4 μg/mg of extract) and ascorbic acid (1.56 μg/mg of extract) were present in higher amounts in the hydro-methanol fraction. Thus, the studied mushroom could be considered as an easily accessible source of natural antioxidants that could be used in the pharmaceutical industry. 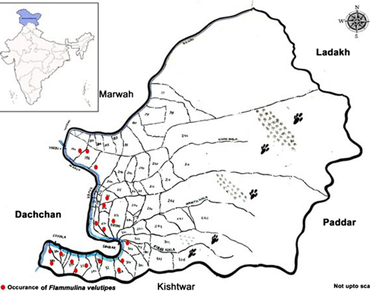 R.S. and Y.P.S. are grateful to the Head, Department of Botany (UGC-SAP DRS II), University of Jammu, Jammu for providing laboratory facilities, and the University Grants Commission, New Delhi (UGC-MRP F.43-124/2014 SR) for the financial assistance.