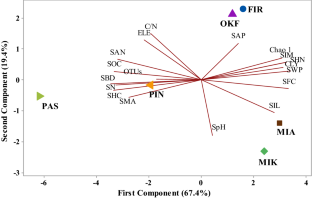 This work was financially supported by DST (DST-IS-STAC/CO2-SR-148/12(G), UGC-DSK-PDF (BSR/BL/16-17/0146) New Delhi and University of Delhi under strengthening R&D programs of Faculty at University of Delhi. Authors are thankful to Dr. R.K. Maikhuri, for his support during the selection of the study site in central Himalaya. Also authors are thankful to the forest department’s officials in Rajouri (J&K) and Bharatpur (Rajasthan) during the collection of soil samples. We thankful to Prof. Manu Agarwal for his help in illumina sequencing and bioinformatics analysis.