Validation for the prevalence of virus complex and identification of virus resistance lines among the genotypes of chilli (Capsicum annuum L.)

*A Correction to this article was published on 05 July 2021

The molecular identification of different viruses was done, because identification of viral disease based on phenotypic symptoms is difficult and complicated. The molecular detection results revealed that the incidence of Chilli Veinal Mottle Virus during kharif crop was predominant, whereas the chilli virus samples collected from late kharif (August–September), rabi (October–November) and summer (March–April) crop resulted in predominance incidence of Chilli Leaf Curl Virus (ChiLCV) among the samples. Whereas the Chilli Leaf Curl Virus (ChiLCV) and Chilli Veinal Mottle Virus in early kharif (May) crop favours the virus complex in chilli. Furthermore, by phenotyping of genotypes for virus disease in the field and genotyping with molecular markers linked to chilli virus resistance, virus-resistant genotypes were identified namely DCA-295, DCA-107, DCA-154, DCA-222, DCA-224 and DCA-232. They were recorded to have least viral disease incidence, which reveals their resistance against studied chilli viruses, and therefore these genotypes were considered as field resistant to the chilli virus disease. 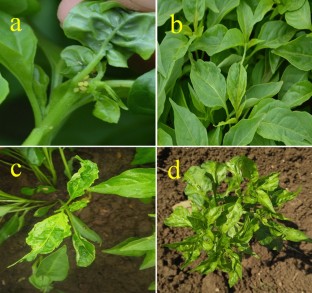