*Article not assigned to an issue yet

The present study describes the efficacy of three organic formulations namely Sanjivak, Jeevamrit and Cow Urine Decoction (CUD) against Dematophora necatrix, inciting white root rot of apple. Under laboratory studies, all the formulations were tested at five concentrations ranging from 2.5 to 20.0 per cent. Among all, CUD was found most effective and significantly superior over treatments exhibiting 75.93 per cent mycelial inhibition in growth of D. necatrix followed by Sanjivak (70.22%). However, Jeevamrit was found to be least effective with mycelial growth inhibition of 63.48 per cent. CUD at 20 per cent concentration provided complete (100%) mycelial growth inhibition of D. necatrix. Under pot conditions, CUD at 40 and 50 per cent and Sanjivak at 50 per cent concentrations were most effective and provided cent per cent control of the disease. Furthermore, in case of virgin and sick nursery conditions, maximum control of disease was recorded with CUD at 50 per cent concentration which provided 93.83 and 88.51 per cent disease control, respectively. The results obtained suggested that organic formulations used in this study have tremendous potential for controlling the root rot disease in apple and therefore could be deployed as efficient green way for management of white root rot disease in future. 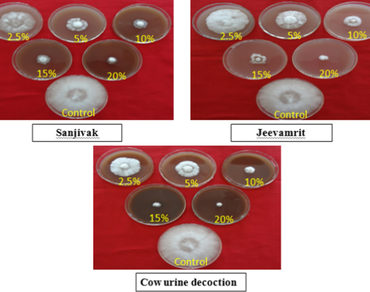 
Muhammad A (2003) In vitro inhibition of growth of some seedling blight inducing pathogens by compost inhibiting microbes. Afr J Biotechnol 2:161–164