Comparative anatomy of resin ducts in some Western Himalayan softwoods

Resin ducts are a common protective structure in Conifers. The oleoresin, a mixture of roughly equal amounts of turpentine and rosin, is synthesized and accumulated in resin ducts. Resin ducts in conifers are considered as the first line of defence against insects and pathogens because of toxicity and sticky properties of resin which repel invading insects and inhibit pathogenic fungi. Present investigation were undertaken with the objective to study the comparative wood anatomy of five coniferous species of Himachal Pradesh. Wood samples of these species were collected from three locations of the state and were studied anatomically under laboratory conditions. It was observed from tangential section of the wood samples that there is a significant variation in structure and distribution of resin ducts among different genus and species of the conifer. It is a good tool of identification as resin ducts are an important taxonomic characteristic feature in conifers. Conifer resins are important renewable resources and provide a range of commercially useful products for chemicals and pharmaceuticals. Comparative study shows noticeable differences in the resin ducts of different genera and even among different species of the same genus also when compared anatomically in terms of structure and number of fusiform rays and resin canal. 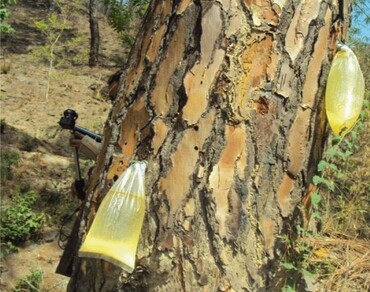 
Fahn A, Benayoun J (1976) Ultrastructure of resin ducts in Pinus halepensis development, possible sites of resin synthesis, and mode of its elimination from the protoplast. Ann Bot 40:857–863


Sudo S (1969) Anatomical studies on the wood of species of Picea, with some considerations on their geographical distribution and taxonomy. Bull Gov for Exp Stat 215:39–130